Cooking ribs which produces a genuine barbecue flavor by using a gas grill, is often a challenge. Gas grills are great for hot and fast cooking, but not so efficient when you need to turn a rack of ribs into tender, smoky barbecue. However, there are some tricks you can use. To get the best possible ribs from your gas grill, all you need is this three step process.

For this example, I am using a full rack of spareribs trimmed. You can use baby back ribs with this same method, but reduce the cooking time about 5 minutes per stage. Otherwise, the total cooking time will be between 1 1/2 and 2 hours.

Your gas grill must be large enough and contain at least two burners, since these ribs will be cooked indirectly. This means the heat will not be below the rack of ribs, but off to the side of the grill. I will explain the set up in detail as we progress.

What you will need:

Preparing the Rack – Barbecue Ribs on a Gas Grill

It is seldom to find store bought spareribs that are properly prepared. You will need to do some basic trimmed before we get started. Ideally, what you’re looking for is a rack of ribs with a square shape and an even thickness throughout. Make sure you inspect the ribs for any loose pieces of meat or fat. Cut off any excess scraps or excessive fat from the rack. This doesn’t mean cutting all the fat off, just thick useless sections.

Since we are grilling these ribs faster than we would on the smoker , the benefit of the fat isn’t as great. We still need fat to keep the meat moist but, we don’t want to end up with an overly fatty finished product.

Once done trimming, rinse the rack of ribs with cold water and pat dry with paper towels.

Rubbing the Ribs – Barbecue Ribs on a Gas Grill

Once the ribs are trimmed and rinsed, it is time to apply the rub. A good rib rub adds flavor but doesn’t overpower the meat. You want to apply the rub all over the rack. This means back and front as well as the side and ends. Apply as much rub as will stick. The natural moisture of the ribs will hold all the rub you need.

You can apply the rub up to an hour before you start cooking, but any longer will affect the texture of the meat, giving it a ham like flavor and consistency. If you need to return the rack to the refrigerator ofter putting on the rub, wrap it in plastic wrap and handle it gently. Preferably, try to get the ribs to the grill within 10 to 20 minutes. If doing so, it is okay to leave it out until the remaining preparations are made.

Making a proper smoke on a gas grill while cooking at lower temperatures is a real challenge. To be honest, while you might be able to give these ribs a hint of smoke, they are not going to have a strong smoke flavor. That is the sacrifice we make by using a gas grill. However, we are certainly going to give it a try by throwing in a couple of smoke bombs to generate smoke. This is a quick, easy, and cheap way to make smoke on a gas grill.

To make a smoke bomb start by placing about 1/2 cup of damp, but not wet, wood chips on a piece of foil. Wrap the wood chips so that one side has a single layer of foil. Poke several holes through the foil to let the smoke out. I’m using two smoke bombs, but you can use more if you wish.

Place the smoke bombs under the cooking grate as close as possible to the burner you are using. You will need to preheat the grill hot enough to get the combustion of the wood started. Once you see smoke coming out of the smoke bombs, turn down the heat and place the ribs on the grill.

The grill placement is most important. We need indirect heat to cook our ribs without drying them out or overcooking them. We also need to be able to hit temperatures up to 375 degrees F. On the grill I am using, the burners run side to side instead of the more typical front to back. I am using the front burner for heat and putting the ribs in the back. This works because most gas grills vent out the back so the smoke I create in the front, will be drawn to the back of the grill.

If you have a grill with the burners running front to back, you will need to use one of the burners on either end. Lets say you are using the left most burner. This means you will place your smoke bombs directly over this burner (and under the cooking grate). The ribs will be placed as close to the right side as possible. If the rack is short enough to be placed running parallel to the burners, set it as far to the right as you can get it. Otherwise, you might have to place it in a more diagonal position on the grill.

Place the rack, bone side down on the grill, close the lid, and adjust the grill until it holds a temperature of 300 degrees F. Now, let the ribs cook for 30 minutes. Don’t open the lid. This will hold in as much smoke as possible. Don’t expect a lot of smoke to billow out of the grill as there won’t be a tremendous amount of smoke production.

Wrap the Ribs – Barbecue Ribs on a Gas Grill

Once the ribs have been on the grill for 30 minutes, it is time to move on to the second stage. The ribs should be browned on all sides. If they appear raw on the surface anywhere continued grilling for another 10 to 15 minutes, otherwise, move on to the second phase. Now we are going to make the ribs tender by steaming them with apple juice. The secret is to wrap the ribs tightly in foil. You want to make it as water tight as possible after pouring in the apple juice.

With a tightly wrapped packet, place the ribs back on the grill in the indirect grilling space. Now close the lid and increase the grill temperature to around 375 degrees F. At this temperature the apple juice will boil, tenderizing the ribs and cooking them quickly.

After the ribs have been steaming in foil for 30 minutes, it is time to turn down the heat and unwrap the ribs. They should be mostly cooked at this point. Look for the rack of ribs to be more flexible. If you pick up the wrapped rack on the end, it should droop down. If you open the foil and the ribs are not browned completely, close up the foil and continue grilling for another 10 to 15 minutes.

Once the ribs are ready to continue, set your grill temperature around 250 degree F, but definitely not more than 265 degrees F. (the burning temperature of sugar). Place the ribs back in the same place to finish cooking.

When smoking ribs it is up to you whether to add sauce or not. However, with the gas grill method I encourage the use of a good barbecue sauce. It adds authentic barbecue flavor to your ribs and adds to the surface texture of the meat.

The secret to a good sticky rib is multiple coats of barbecue sauce. The best method is to sauce one side of the ribs, close the lid and cook for 5 minutes. Then open the lid, flip the ribs and sauce the other side. Do this for 30 minutes and you will have a heavy coating of barbecue sauce.

Five minutes after you put on the last coat (at least 2 coats a side) take your ribs off, cut, and serve. 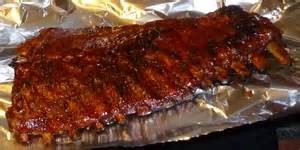 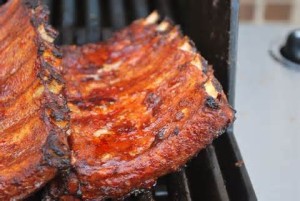