I have a lot nail colors. I have about 40 of them. My friends and family buy them for me as  gifts and just they know I really like them.

The last time I went to the place that I go when I was in Walnut creek CA. This is the place I have been going  to when I lived in Walnut Creek. The people usually  take care of me  weren’t there. But I still got my nails done.

I had a new person take care of me. At the time I was wearing Sun Shine Yellow color. Just on my toes. Not my hands. I just wanted my feet to get done. It took a long time for the yellow to come off. They had to use a lot of nail polish remover. Some of the yellow nail polish got on one of the white towels,  and on the chair.  The Owner was not happy. For the whole time that I got my nails done she would talk to the person who worked on my nail in her language not English so I won’t hear. The person who worked on my nails rushed and hurt one of my toes. It’s a long time for the polish to come off all the way. I got the strong colors that last. My favorite brand for my nails is Sally Hanson. The company has bright colors that I like. They last a long time even when you don’t use a top or bottom coat. I like to change my nails color a lot. Some time I change the color about twice a week.

Well the color I got from the nail salon looks to be like Smurf Blue. I don’t have this color at home. I hope that it would last a long time. I was wrong. It lasted four days before coming off. My nails looked good  in the nail salon. But when I took a close look one foot looked different and the shapes of the nails. I don’t always wear a top and bottom coat. Sally Hanson nail polish lasted longer than the nail polish from the salon. The nail salon used top and bottom coat. I paid a lot of money for a shit job. Won’t be going back there. Why is it hard to fine a good place for nails? I don’t mind spending money on good work. I tip big too. 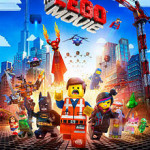 Over the weekend, we watched The Lego Movie so I need to review it for you. First off, if you don’t like kids talking through the movie, probably wouldn’t be a good idea to see it for a weekend matinee. But nonetheless, they weren’t too bad except for one scene (won’t give a spoiler) that caused a small child to cry.

After seeing it, I had to ask, “was this movie really for kids?” It seemed more like adult social commentary. We’re being force fed a stupid media plus a stupid culture that makes us, well, stupid. The main song was the highly Orwellian “Everything is Awesome,” which trains the non-thinking highly-conforming workers to work in a rhythm with the brainless song. The main TV show is “Honey, where’s my pants?” which seemed like it got its cue from Mike Judge’s dystopian flick Idiocracy.

So it appears the people are halfway to Judge’s Idiocracy and of course as you guessed, are in need of a leader to take them off that path.

Well, as you also guessed, your hero is Emmet Brickowski, a clueless and forgettable average Joe who suddenly is forced to rise to the occasion.

The villain is one President Business who plans on Krazy Gluing everyone in the Lego universe. His real intentions are unknown until the end of the movie.

Sound stupid? Actually, it’s not. It’s quite good. Throw in a bunch of other figures like the heroine Wyldstyle (who really should have been the protagonist, as you will see later), a wizard Vitruvius, Wyldstyle’s boyfriend Batman (yes, that Batman), Superman and Green Latern who have a weird relationship, Shaquille O’Neal, several of the dudes from Star Wars, etc.

One criticism I had was probably more age related than a problem with the movie, but I had a hard time following the action scenes. They’re plastic pieces fighting each other and going faster than a guy in his forties with bad eyesight can follow. If you’re young with decent vision, it probably won’t be a problem.

I never read a review so I didn’t know what was coming. I won’t give it away, but it did have a pretty good twist to it. And the movie throughout was quite watchable. It had plenty of adult humor so I’m thinking the dialog was written for adults and the action and looks were written for kids.

There is some plastic death though, but the character who dies comes back as a ghost so maybe it won’t be too disturbing for kids although one of the kids in the movie theater did start crying at the scene. So I probably wouldn’t take a kid under five to it.

Danny still works in the corporate world but not for too much longer. In the meantime, he values spending quality time with his family.